We call my dad, Jerrypedia… because his name is Jerry and he’s like Wikipedia but more accurate. He’s a walking, talking encyclopedia. At all times, we are ONE phone call away from anything we need to know. Lost on a highway? No problem. See a bird and want to know which type it is? No problem (the answer will also come with said bird’s migration pattern, diet, and where you need to buy the best bird seed to feed it!) He should be on Leno. Really.

And so, in telling Dad that Crowley and I are making an eye patch today, he passed along something you might all like to know. Pirates did not wear eye patches because they had a bum eye. They wore them so that when they went below the deck, which was utter darkness, the covered eye could see easily in the dark. They moved the patch to the other side, took care of business and headed back into daylight! Who knew? Don’t you wish you had a Jerrypedia? I mean Google just can’t offer the same context.

So your little pirate is going to need an eye patch. There are TWO ways to approach this. One involves sewing. One doesn’t. The truth is I love to sew. Especially for my boys. But here is a link to a no-sew tutorial that is easy and comes up with a very similar result. And while we are on the subject of sewing… not that we are… but if you think you might be interested and are on the fence. Go for it! It is so much fun and is not hard. It’s like following a recipe in the kitchen. That’s all. And like anything, else the more you do it the better you get. And also like anything else, once you feel like you are awesome at it, you’ll make silly mistake and voila… humility! Circle of life. There it is.

I digress. Where was I?

Shopping list: (substitutions of whatever you have on hand will be perfect!)

Create a template for your patch or use the same one I did. I found it here.

Place template on top of two layers of felt. Following your template, cut carefully. You will end up with two eye patch shaped pieces of felt. These two layers will be sewn together with the elastic sandwhiched between the layers.

Take your elastic over to your child and measure. You want a piece that comfortable fits around their head meeting each side of the patch. Add 1/2 inch to that measurement. NOTE: the elastic should not be stretched when eye patch is in place.

Sew the end of the elastic to the side of one felt layer of the pirate patch, using  a 1/4 inch seam. Repeat for the opposite side of the patch.

Place the the second piece of felt on top.

Sew the two pieces of felt together, using a zig zag stitch. 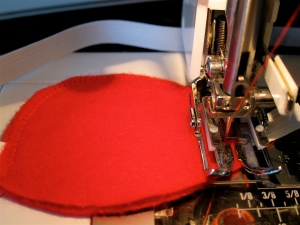 SMALL PRINT: I originally tried making a pirate patch with black craft foam and found that the foam could not stand up to one minute of toddler play. ALSO, it goes without saying, that this project contains elastic and could be a strangulation hazard for a younger child who is playing with it unsupervised or who is playing with a bully. There, I said it.