“So we have an ocean that we plan to fill with LOTS of sea life. And it looks like we’re going to need a way to motor 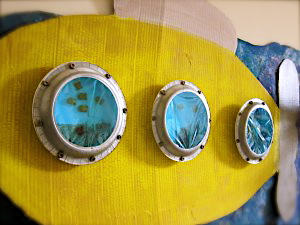 around and see it all. Let’s make a submarine!” There it is. What it’s like to be a thought in my brain. One thing leads to another and of the many, many voices in my head, not a single one ever yells, “Stop! Go to bed! Enough already!” Not a single one. So here goes. A yellow submarine with the world’s most awesome portholes.

You need a large cardboard box. We move so often that we have plenty. (But I’m not bitter.)

Here are some of the other supplies you’ll need:

Freehand the submarine shape. Keep it simple and easy. Oval for the body. Semi-oval for look out glass up top. And you need a rather well-rounded rectangle for the propeller. My motto when making kid’s stuff applies: it doesn’t have to be perfect, it just has to get done.

Paint the submarine. Our son wanted to paint it red. Until we played him The Beatles, “Yellow Submarine.” Yellow it is! (He’s still singing it.) White for lookout bubble. Metallic for propeller. 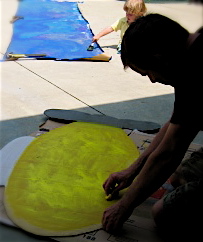 Now you are ready to make your portholes. I followed the easy instructions from this site.

What’s great about making the portholes, is if your 3-year-old, like mine, becomes a little over zealous in adding fish and Cheerios (not on list… don’t ask, just go with it), the porthole still looks awesome. He is very proud of himself and so am I. 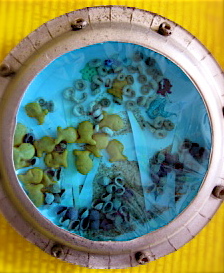 The more fish and chaos in your underwater sea scape the better!

Once your portholes are complete, simply attach them to the submarine, using painter’s tape or a hot glue gun. Sit back and enjoy the view! Remember: we all live in a yellow submarine! Live it, Anna

Playing The Beatles hit while making this submersible is essential.

6 thoughts on “A Submarine With a View”